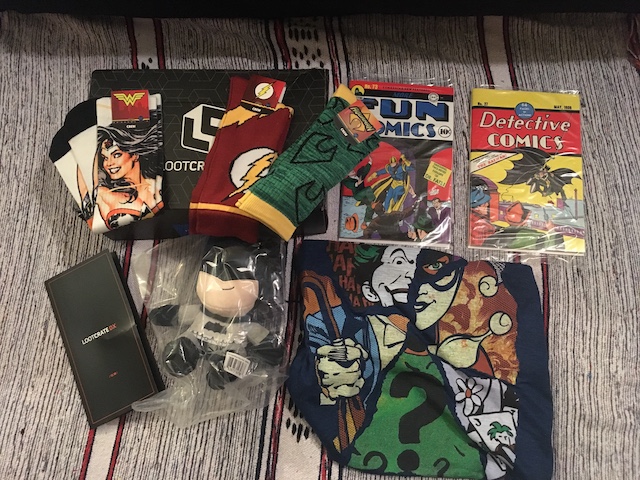 It is also priced at a premium. The standard price, including shipping to the UK, is a whopping £59 GBP ($74 USD). Loot Crate now price in GBP for UK orders, although the exchange rate can sometimes change. Discounts are sometimes available, including for longer term subscriptions.

This is my first ever Loot Crate DX as it is just priced too high to make economic sense for most UK subscribers to buy it on a regular basis. I did pick this up using a short-term discount. Loot Crate now ship this to you from within the UK, which at least removes the risk of being charged import taxes.

For a premium box, shipping was most definitely not premium. This arrives in a slightly larger and heavier box than a standard Loot Crate, but it was sent with the budget carrier Yodel. This is a big downgrade from the Royal Mail service that Loot Crate has used with other boxes. The box also had a tear in it and looked like it had been thrown around, although nothing inside was damaged.

To add confusion, two boxes arrived together with the carrier, including an item I hadn’t ordered. Loot Crate DX also usually has the same theme as the main Loot Crate box. In this case, it didn’t, with the theme DC Takeover used.

Once I worked out all that out, Loot Crate DX did turn out to have sent an interesting box, with a fold out sheet included with more details about the items.

A good quality blue T-Shirt to start things off, with a mashup of prints of Batman villains.

These include the Joker, Harley Quinn, the Ridder, Catwoman and the Penguin.

I’ll use my usual T-Shirt valuation of $10 USD. 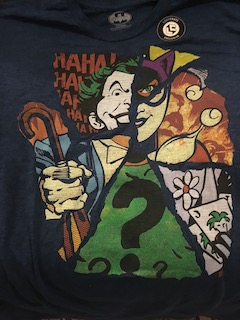 This is a decent enough official plush, made by Kidrobot.

There’s both a fun and menacing look to Batman here.

You can see the Dark Knight Batman Phunny on Amazon.com.

Based on the selling price across a range of sites, I’ll value this at $12 USD. 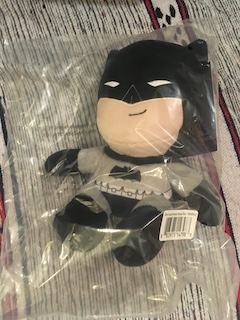 What have we here? The first of three pairs of socks in one box.

Loot Crate has billed the set of socks as an exclusive, which I presume means you can’t usually buy these as a bundle. There’s no indication that the socks themselves are exclusive and, indeed, these are branded as being made by Bioworld.

They are also all Crew style socks, albeit of different thicknesses.

This first pair is a good green colour and represents Aquaman. I’ll find plenty of opportunities to wear them.

I get plenty of geek socks through my Loot Wear subscription anyway. The difference with these Loot Crate DX socks is they are a size group up from those I usually wear. But at least they are not too small.

I’ll use my usual price point for geek socks of $10 USD. 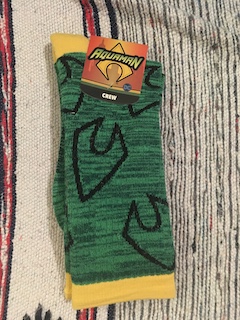 I’m not so keen on this full print design, although the picture itself is certainly eye catching. But there has to be some variety in styles with three pairs of socks in a single geek box.

Another $10 USD to add to the value assessment here. 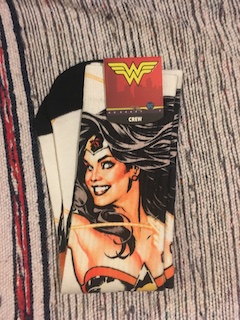 The final pair of socks is the best of the bunch, with a pleasing red colour as well as the lightning bolt logo of The Flash.

Two decent pairs of socks out of three isn’t bad. 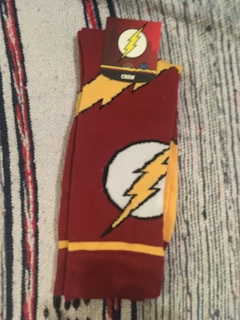 This is a reprint of the comic which featured the first appearance of Batman.

I find it difficult to present it as an exclusive, as it’s been reprinted so many times.

This does come bagged and boarded, which is always appreciated. It also comes with a Certificate of Authenticity, for whatever this is worth for this type of item.

I’ll use the standard value for a new comic of $4 USD. 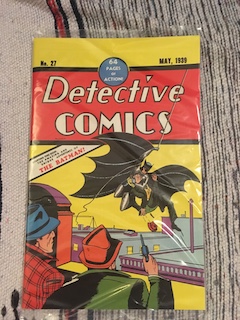 Yes, yet another repeat item of the same type in the box.

This reprinted comic featured the first appearance of Aquaman.

It is bagged, boarded and comes with a certificate of authenticity. 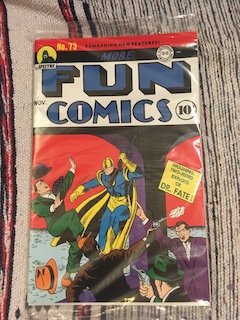 There are decent items in this Loot Crate DX, but it feels like it’s missing a big ticket item.

I make that $60 USD of value, which falls a bit below the cost price.

The box really doesn’t even feel as if it has that much value there. This is largely down to the repeated items of the same type and the excess of clothing items.

It also feels like it’s severely lacking in exclusive items. It’s difficult to think of comic reprints as exclusives.

On the plus side, this box does avoid the really cheap items and useless stuff like pins that plague other boxes.

I do like the clothing items, especially two of the pairs of socks and the T-Shirt. The plush is good too. The comics do feel surplus to requirements, but fit the DC Takeover theme suitably.

I’m happy overall as I ended up with the extra item from the month before and subscribed at a discount, but if I’d paid full price I’d be disappointed.

I feel that Loot Crate DX could offer more. Some months are much better, so maybe I just got unlucky.