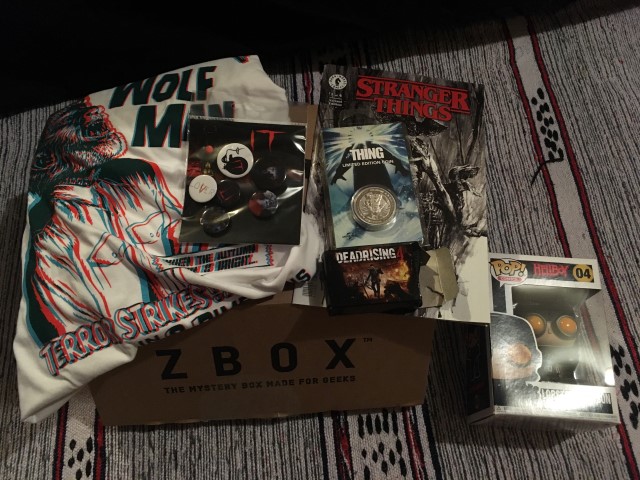 My second Zavvi ZBox in a row. I enjoyed the last one, so also picked up the October 2018 box.

These boxes used to come with an information booklet, but this has been dropped. The missing information booklet always makes me wonder how much the box contents vary from subscriber to subscriber. For a while, I thought that the theme had been quietly dropped too, but it turns out this one came with the theme Fear.

This all arrived quickly through Royal Mail in a heavy box, made out of the usual sustainable cardboard.

Discounts are available if you sign up for a longer subscription.

I like this official Universal Studios T-Shirt, which carries a fetching 3D style design, with blue and red outlines.

It looks like an old style movie poster, so has that retro feel to it.

I’ve get to find a pair of 3D glasses to see if this gives the full effect.

Well worth my usual price point for a T-Shirt of $10 USD. 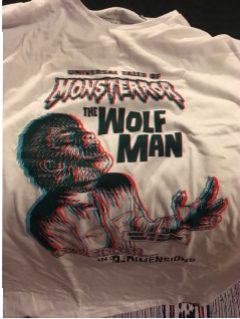 It’s always great to get a POP! as it feels like there’s value in the geek box.

To me, this one is an attractive display piece. I like the giant goggles!

You can see the Hellboy Lobster Johnson Funko POP! Vinyl on Amazon.com. 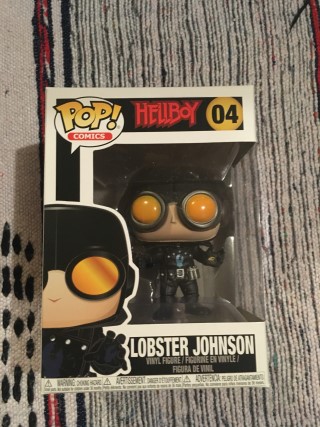 This is a ZBox exclusive. I think including a coin each month is one of their things now.

Took me a while to spot the money, which is etched on the coin itself. I have #3148, so way down the list of being collectible.

It is a cool character though and officially licenced from Universal (mentioned, in case, like I did, you get this muddled up with Thing from the Fantastic Four – or even Thing from The Addams Family).

I’ll value this at my usual coin point of $2 USD.

The price is much higher if you have to buy your coins directly from Zavvi to complete your collection with Zavvi. And they also also have even rarer gold variants for many of their coins. 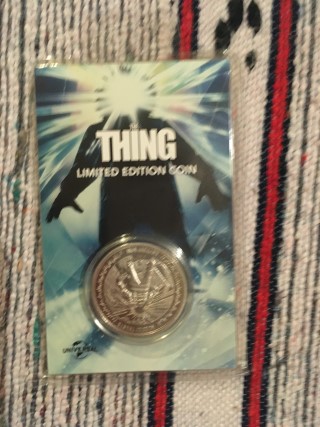 This has the Loot Crate symbol on the box, so obviously started out as an exclusive in one of their boxes.

With a bit of detective work, I’ve traced it to the September 2016 Loot Gaming.

It is new to me and rather nice. I always find items like this one useful.

It comes in a bag too, with tools like pliers, a screwdriver, nail file, bottle opener and even a little torch (with battery).

I would value this quite highly, but you can still buy this from Loot Vault (the Loot Crate outlet where they get rid of remainder items) for $4 USD, so that’s the price I’ll have to use. 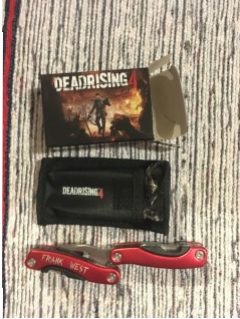 This is the ZBox variant cover, dated internally as September 2018 (although it came in the October 2018 box).

Not bagged or boarded unfortunately, but nice to have a comic. It’s the first one I’ve had in a geek box in quite a few months.

This one is published by Dark Horse comics.

There’s no cover price, but I’ll use the value for the main version of the comic, which is $3.99 USD. 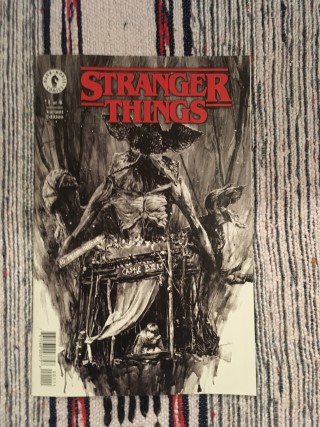 As badges go, this is a nice set of badges. Six of them in total, in a display bag, with the official Warner Bros branding on the back.

I’ll add them to my box of badges. 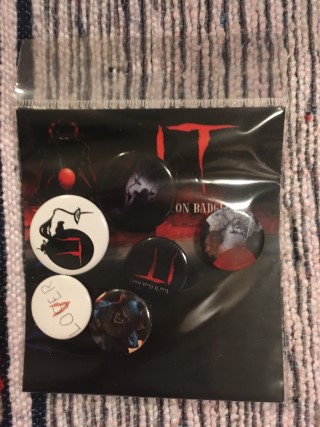 An excellent box! I get $33 USD of value, which is above the cost price.

Two items stand out to me, the multi-tool and the T-Shirt. But there is value elsewhere too.

Certainly something of a horror theme once again, rather like the previous month. But that could just be the Halloween and October associations.