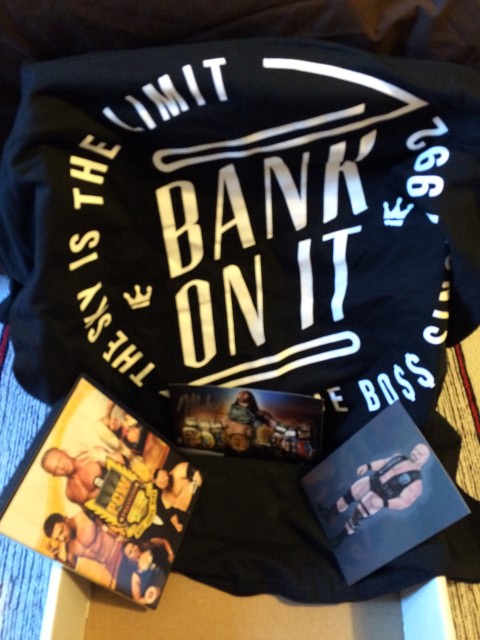 There is undoubtedly a section of the geek box audience that enjoys professional wrestling, so I’m taking this opportunity to review the debut box from Wrestle Crate UK.

Now, I say the debut box, but Wrestle Crate has been operating from the US since earlier this year and it has been shipping to the UK. I didn’t subscribe then as both the shipping cost and the associated custom charges would make this prohibitive.

The UK version seems like rather a franchise agreement, with the idea that some of the items will be the same as the US box and others will be locally sourced.

The pricing within the UK is much more realistic. Including shipping, the Standard Wrestle Crate, which is the one that’s reviewed here, costs £15.99 GBP ($24 USD). There is also an Ultimate Wrestle Crate available for £25.99 GBP ($39 USD). Currently, there are no discounts offered for signing up for longer subscriptions.

This T-Shirt is based around a WWE character, a company notoriously protective of their copyright, so it’s rather a brave choice for a debut box. The design itself is good, with striking white text on a black background.

This is a two disk DVD set from an event held in March 2015.

Some of the international stars on this show include Angelina Love, Davey Richards and Mr. Anderson. There are also top British Wrestling names on the the show.

These disks aren’t available in shops, so they’re only available by mail order and at PCW shows. 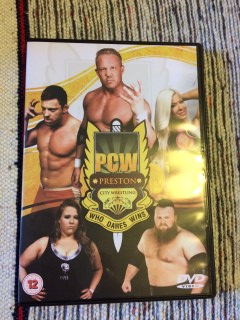 This is a great item to have included, but rather dated as it doesn’t include Matt Hardy’s recent win of the TNA World Title.

This is postcard size and printed on photo paper and signed in silver pen. It is a striking pose, even if Matt Hardy isn’t immediately recognisable.

From autographs I’ve received from other boxes, I’d have preferred to have seen this on higher quality stock, perhaps with an exclusive promo card produced. I’d also have liked to have had a certificate of authenticity included (although photos and autographs of this type are commonly found on the independent wrestling scene).

You can buy Matt Hardy items at Amazon.com, including both WWE and TNA figures. To acquire a signed photo of a star of this type at a wrestling show would typically cost around $5 USD. 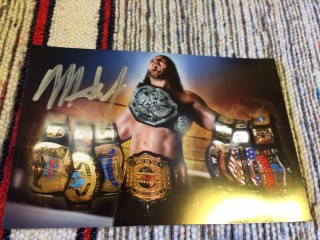 This is also postcard size, but printed on higher quality paper than the Matt Hardy autograph.

The back of the card says that this is an exclusive limited edition from Calling Spots (a wrestling fanzine, which I believe is part of the same company as Wrestle Crates UK). There’s no information about how big the edition is, or who the artist is.

I’ll value this at the artwork standard of $2 USD.

Like Professional Wrestling? Find Out All About Wrestle Crate UK Here

A box full of decent items.

However, where this is lacking is in the quantity of items. Four items just doesn’t feel so much like value for money, even though there’s not much filler here.

I make the total value $21.50 USD, which is below the shipped cost of the box. You could argue that the signed photo is worth more and it’s unfortunate that the PCW DVD was on sale the week that this box shipped.

This is very much a box designed for the hardcore wrestling fan. The British Wrestling scene is great right now and I certainly appreciate the PCW DVD, but I would have expected to see more WWE content to appeal to the casual fan. Even the T-Shirt is rather subtle for non-hardcore fans.

It is also interesting to see how this differs from the Wrestle Crate US. From looking at reviews, the US box contained the same T-Shirt and the Steve Austin artwork. The UK DVD is unique to the UK box (this isn’t necessary as most independent wrestling DVDs aren’t region coded – but I presume that there were good promotional reasons for including this).

The Ultimate Wrestle Crate looked like much better value for money – also including a variant Daniel Bryan Funko POP! Vinyl, a Mr Andersen signed photo, a badge and a wrestling DVD from a small wrestling promotion based in Wales. But, the cost is much more as well.

If I was to buy Wrestle Crate again, I think I’d go for the Ultimate Wrestle Crate. There is fun to be had here, but the overall concept, box presentation and value equation within the UK needs some more work.