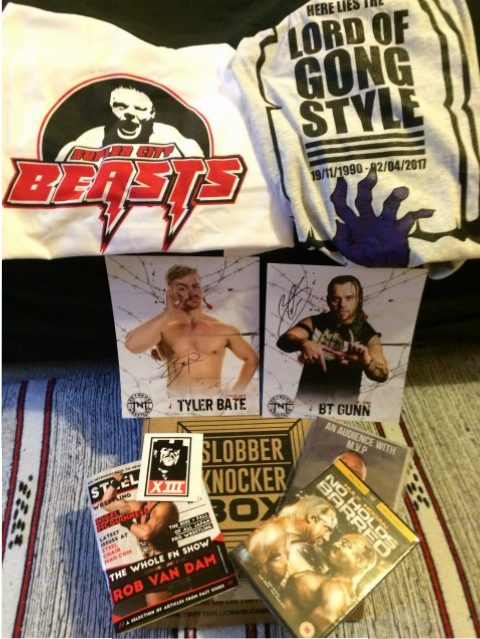 This is my second month in a row receiving Slobber Knocker Box. I’ve been enjoying several different wrestling related boxes recently and this is another good one to include in the mix.

Slobber Knocker box is a UK based wrestling box. Unlike several others, which have both a UK and US version, I believe that this one is exclusive to the UK audience (and anyone who wants to pay the international shipping). That means there aren’t all that many reviews of it about.

You can get several different variants of this subscription. This review is for their largest box (with extra items), the Deluxe Box. This costs £30 GBP ($38 USD) per month, including delivery within the UK. Slobber Knocker Box also offer a standard sized box, which costs £20 GBP ($25 USD) per month, as well as a junior version aimed at 5 to 12 year old fans for the same price. There’s also a T-shirt only subscription available at £11 GBP ($13.75 USD).

The delivery for this one through Royal Mail was straightforward, with the hiccups from the previous month ironed out.

One improvement I’d recommend is that this box doesn’t come with an information card, so it’s not clear which items are exclusives. It would be useful to have that included (and it’s a missed opportunity for advertising).

I received a Brock Lesnar T-Shirt as a bonus item last month. This one has a slightly different take on the character.

It’s a decent enough design focused on “The Beast” aspect of the character. 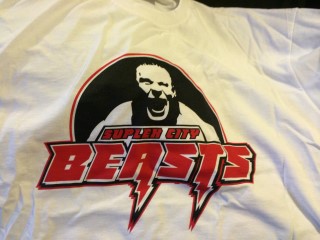 This is tribute style T-Shirt based around the Undertaker’s retirement and bringing in a strong style reference (with the gong, I’m assuming, referring to the sound marking the start of every Undertaker entrance).

This is a good design that works well the light background. 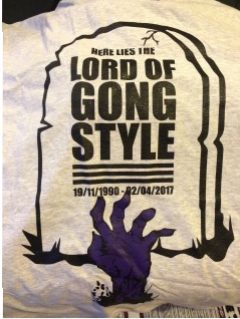 Tyler Bate is one of the big names on the UK wrestling scene right now, largely thanks to his WWE UK exposure. He’s also a fantastic wrestler.

The style of this photo is similar to those in the box in the previous month, carrying the TNT Extreme Wrestling Logo.

As with last month, I’ll value this signed photograph at $8 USD. 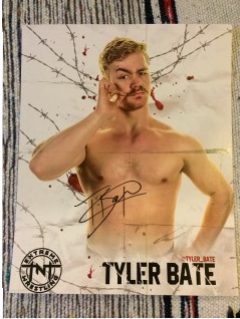 Another good photograph, this time of BT Gunn. Always good to have autographed items like these in the box. 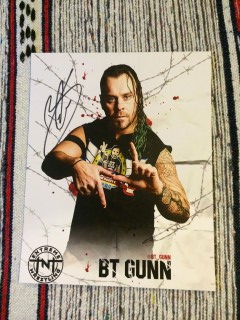 This is a taster fanzine in A5 size including a series of articles from previous issues. The production values of this are excellent for a fanzine and comparable to newstand magazines.

The main feature is an interview with Rob Van Dam. There are several articles on Japanese wrestling and a look back at some of Sting’s career.

This is only a thin promotional item, so it’s difficult to value. For that reason, I’ll go with a low end figure of $1 USD. 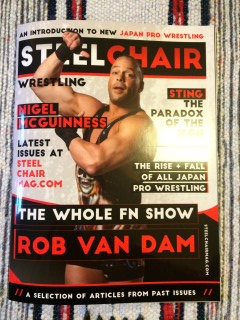 This is one of those iconic films for wrestling fans, featuring Hulk Hogan and Zeus in a story that eventually moved from the film to a WWF (and many years later WCW) feud.

This version is released by WWE Studios and comes shrink wrapped and sealed.

You can buy No Holds Barred at Amazon.com. The typical value is $8 USD. 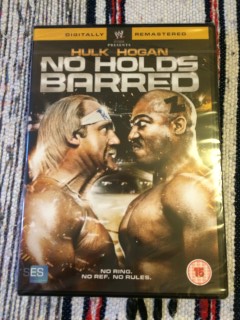 An Audience With MVP DVD

This is an interview DVD released by Pro Wrestling Chaos, featuring the former WWE and TNA wrestler.

An interesting item to have included

I can’t see this available as a DVD on the Pro Wrestling Chaos site, although it is available on their on-demand service. Their other “Audience With” DVDs are available at a discounted price right now. Based on all of the numbers, I’ll price this at $4 USD. 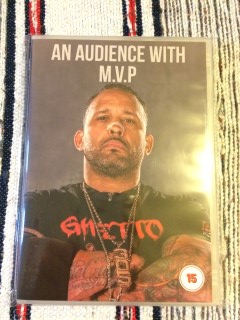 I’m not certain what the XIII means. Maybe unlucky 13? Wrestlemania 13 was a memorable one for the Undertaker as a he won the WWF title, but it wasn’t his first championship win and the sticker doesn’t really match that era.

A suitable item to round off the box, although I won’t assign a value here. 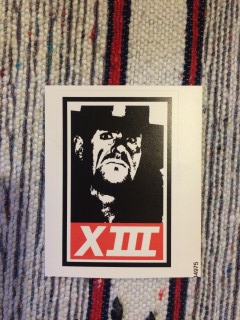 Get Your Subscription To Slobber Knocker Box Here

A well-thought out collection of pro wrestling items.

There is $49 USD of value inside the box, which compares well with the $36 USD cost price.

The DVDs are always welcome and it’s a change to have DVDs other than wrestling shows. There are also good T-Shirts and autographs included.

One possible criticism with this box is a lack of variety but I did prefer this to the previous month. I think that wrestling fans will appreciate the contents.