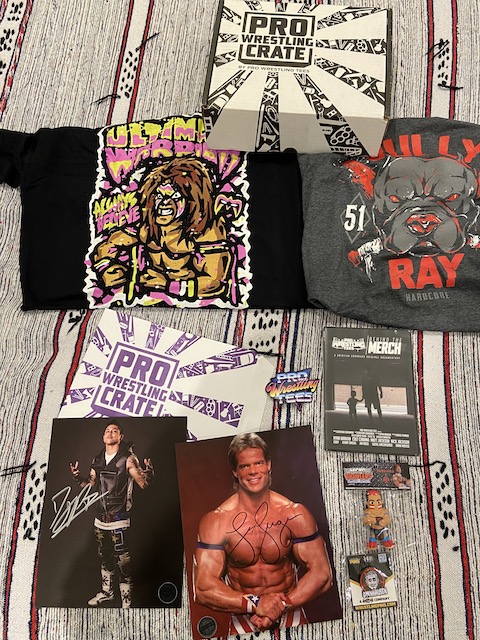 Here is another of my occasional sidesteps to look at mystery boxes aimed at professional wrestling fans.

Pro Wrestling Crate. is one such box, containing a selection of interesting items, representing wrestlers both past and present.

These boxes used to come with a theme, but I don’t believe they do so now, just containing a selection of interesting wrestling items instead.

The main version of Pro Wrestling Crate comes with two T-Shirts and various other items, for $44 USD (£35 GBP), including shipping to the UK. There are also two smaller versions available for reduced prices. I picked this box up with a slight discount.

The December 2020 box arrived with me safely, with the UK leg of the delivery completed by Royal Mail. These come in quite a small box, but that is reflective of the type of items and autographs inside. The box does come with an information card.

An instantly recognisable print of the late wrestler, complete with his famous vibrant colours. This takes you right back to the early 1990s. 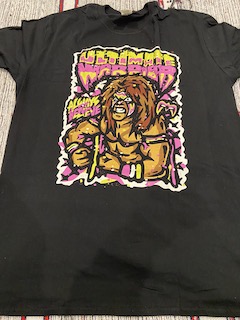 Bringing things more up to date, this grey T-Shirt with the dog print screams aggression. 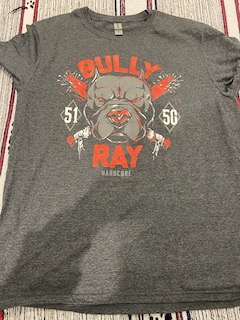 The autographed photos in Pro Wrestling Crate come in an envelope, with a certified sticker in the corner.

Lex Luger is instantly recognisable, captured in his prime here. A great item to have.

I’ll use my standard wrestling autograph value of $10 USD. 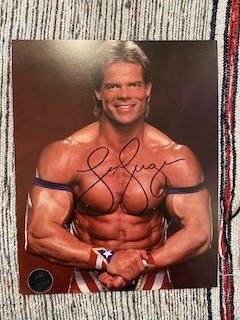 This was billed as a bonus autograph, but to me it is an excellent choice to have included in the box. I’ve always liked watching TJP (or TJ Perkins) wrestle. 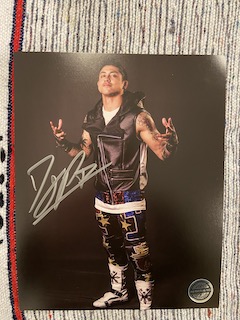 Pro Wrestling Crate includes these little figures, which are all collectible.

I think this is a good likeness of Tatanka. 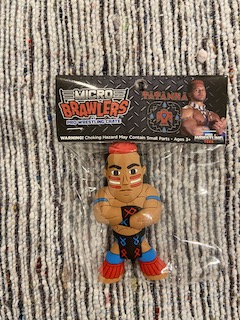 Behind The Merch Documentary DVD

This is an original DVD and it looks like an interesting watch. It is about the history of Pro Wrestling Tees, essentially the store behind Pro Wrestling Crate.

It is hard to value this as, although it’s original, the same film is available on YouTube. I guess it depends if you like having a physical version. 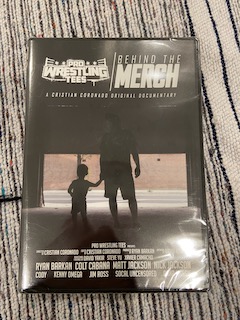 It’s better than a sticker, but there isn’t really a value here, particularly as this arrived with a fold. This is destined for the bin. 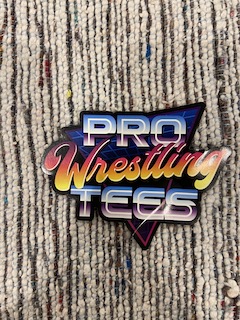 This is the wrestler in the crate I know the least about.

As usual with pins, there isn’t all that much I can say about it, but it is neatly presented. 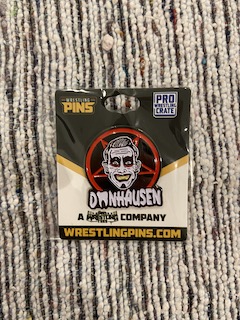 An excellent pro wrestling themed box. I found this one a lot of fun to look inside.

I get $51 USD of value, which is slightly above the cost price.

Two great autographs top the bill. The T-Shirts are decent too.

There isn’t much to say about the smaller items, but they round the box out nicely.

With this type of box, it depends a lot how much you like the wrestlers included. This box has a good selection of modern and older wrestlers. One I should pick up more often!