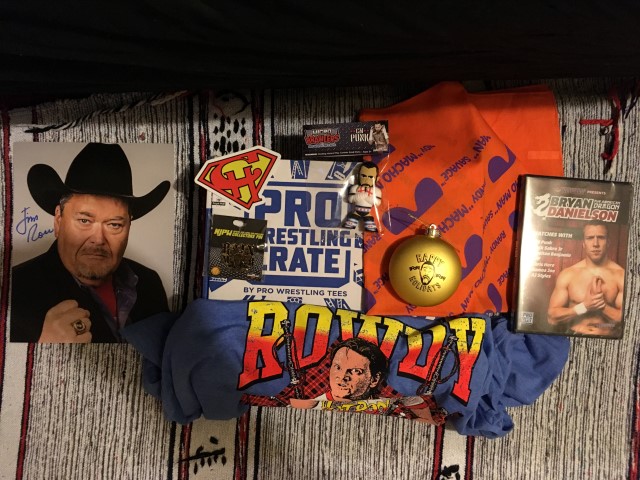 Pro Wrestling Crate is a pro wrestling fan subscription box shipped from the US. It contains a selection of items, many exclusives, officially endorsed and licenced by wrestlers (or their families).

At the time of purchasing this box, they offered three different versions each month. This included a basic version with one T-Shirt, but also upgraded versions with two or three T-Shirts. From the January 2017 box onwards, they’ve announced that only the two T-Shirt version will be available.

Pro Wrestling Crate ships in a thin and light box, which is surprising considering the number of different items included inside it.

The December 2017 box arrived with me in the UK in good time and came with the wide open theme of Staff Favourites. It also came with an information card with more details about the items.

I believe that most of the items are exclusives, although the information card doesn’t make that clear. Several carry the Pro Wrestling Tees logo (which is the company behind Pro Wrestling Crate).

This is a very visual graphical T-Shirt. The design reminds me of Rowdy Roddy Piper on the front of a wrestling poster or an old WWF magazine.

I’ll value this at the standard price point I use for T-Shirts of $10 USD. 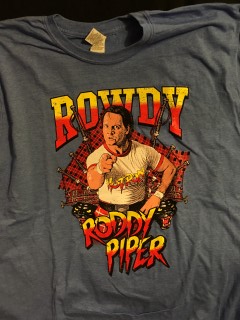 This is a collection of Bryan Danielson (also known as Daniel Bryan) matches, all recorded between 2004 and 2010.

Looks well worth a watch.

I’ll use a typical value here of $8 USD. 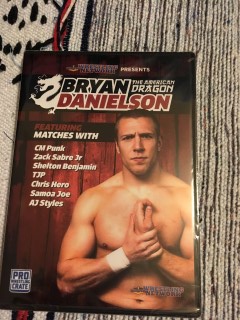 This is exactly the kind of bandana you can picture Randy Savage wearing.

A vibrant orange colour with the sunglasses logo printed on it.

Again, there’s a bit of guesswork to assigning a value. I’ll go with $6 USD. 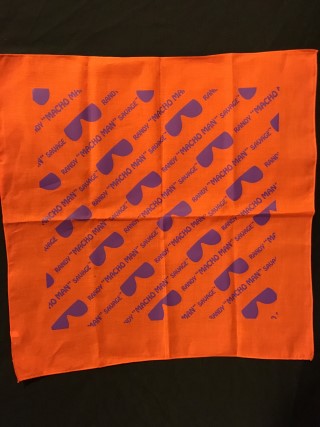 A little nod to Christmas with an ornament for Christmas Tree.

This is gold and came boxed. It’s certainly different, but rather a non-item for me. 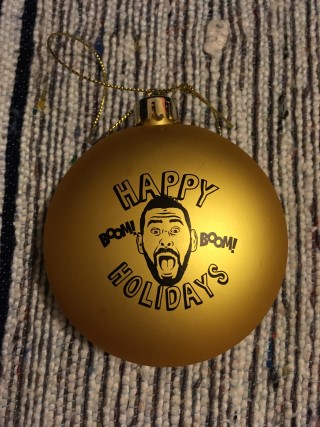 This is CH in a Superman style logo.

As a small sticker, I can’t bring myself to assign a value. 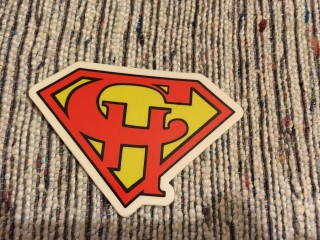 The Micro Grapplers are exclusive mini figures which come with Pro Wrestling Crate each month.

CM Punk is depicted well here and has a rubbery feel. 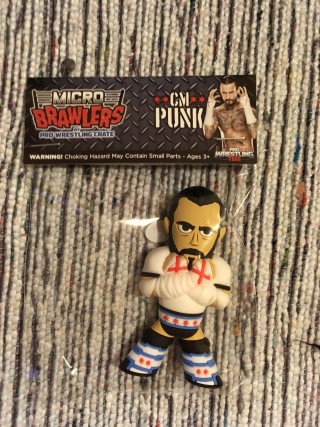 Rather nice, as pins goes. This one comes packaged. 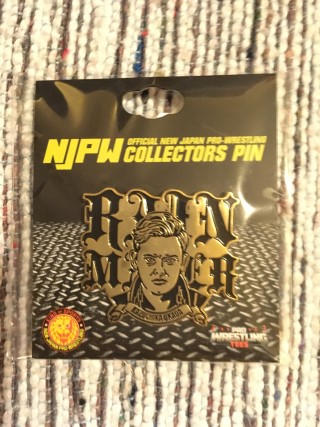 An autograph of a wrestling icon, which comes on a high quality photo and in an envelope.

Based on standard autograph prices, I’ll value this at $10 USD. 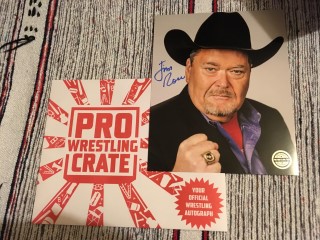 I get $42 USD of value, which comes in above the cost price.

For me, the best items are the Bryan Danielson DVD and the Jim Ross autograph. Both worth having.

Some of the smaller items aren’t up to as much, but they do help to bulk the box out.

As you’d expect from a T-Shirt company, a lot of effort goes in here. The larger subscriptions would also have had access to a Young Bucks T-Shirt and an Eddie Guerrero T-Shirt.

This is one of the best pro wrestling boxes. There is quite a competitive market there, but if you’re a fan, it’s worth your time to take a look.