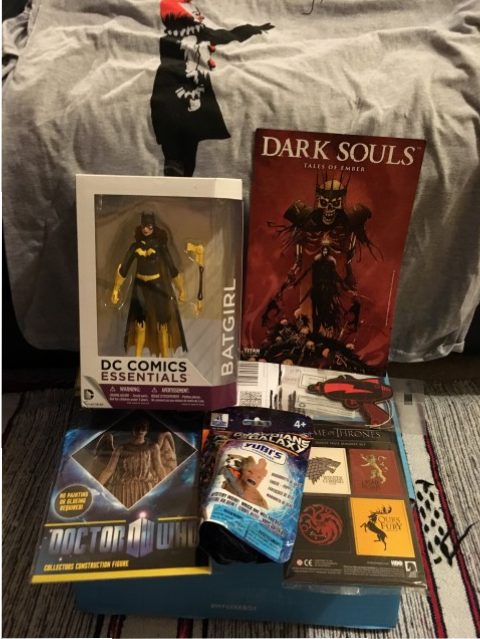 I’ve had something of a mixed relationship with My Geek Box over the years. It used to be run as an independent UK geek box, but was sold to The Hut Group. My subscription ran into all kinds of challenges with the transfer.

It’s now something of a sister box to the Zavvi ZBox, which is also released by the same company. Sometimes, geek interest items get muddled between the two boxes. Everything does seem much better organised now, although cancelling a subscription can still be more difficult than it needs to be.

I picked up the September 2017 box to see how things had developed. Everything did arrive smoothly in a larger box than normal, although this came through a courier rather than the preferred Royal Mail.

My Geek Box doesn’t come with a specific theme each month, so the items can be varied.

This did come with a small information card, which I don’t recall seeing before. That’s useful to find out about the items, some of which had variants which could have been in the box. The reverse of the small card has a picture of a design which can be purchased on a T-Shirt from the main My Geek Box shop.

As far as pricing within the UK goes, you can get a one month subscription, which delivery included, for £17.99 GBP ($23 USD). Like most geek boxes, this automatically renews unless it’s cancelled within a very narrow window.

My Geek Box have several other box choices available, including My Geek Box Lite for £9.99 GBP ($13 USD). The main and lite boxes overlap with some items. When I reviewed the Lite box before, I thought that the main box provided much better value for money.

My Geek Box also offers a Kids box on subscription, as well as a much more expensive mega box, which is sold as a one-off purchase.

This one is a film tie in and billed as an exclusive.

I’ve always thought of grey as a good T-Shirt colour. This has a simple design of a scary clown on the front. 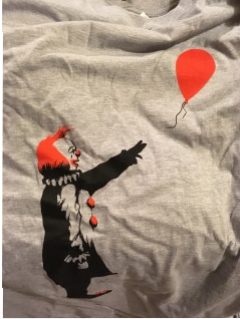 This is a construction kit, where you press the pieces together to form a Weeping Angel.

It starts out completely flat.

As a Doctor Who fan, I like this. It’s also something a bit different in the box.

These are easily available for around $3 USD, so I’ll use that as the price comparison point. 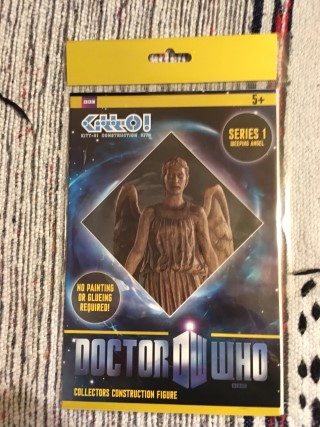 These air fresheners come in handy.

This one is billed as a car freshener and looks like a laser gun, but you could hang it wherever you wanted.

These are low cost items and prices vary a lot. This isn’t branded, so I’ll value it at $4 USD. 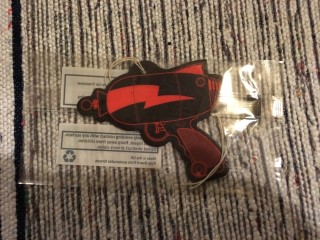 These are four pretty cool magnet designs that would look good on any fridge. They are sheet of four magnets you punch out from the packaging.

These aren’t my first Games of Thrones magnets. I received a different set (map based) in the January 2017 Sci-Fi Block (a geek box that no longer exists).

I can find a similar version of these online as the Game Of Thrones House Sigil Magnet Set on Amazon.com. But that set has an additional three magnets.

Based on the selling price of the larger and compared with similar items, I’ll value these at $8 USD. 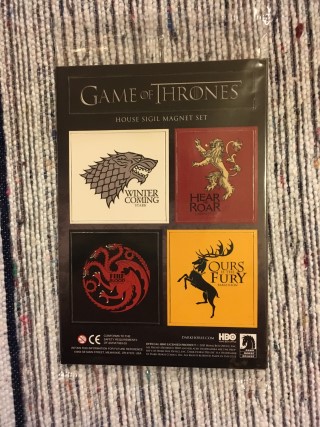 Guardians Of The Galaxy Blind Bag

These blind bags are always fun items. I got one of the same series in the March 2017 Infinity Crates.

This bag contains a finger puppet, which is something a little different.

As with so many blind bag items, these are surprisingly expensive buy one at a time. I’ll value this at $4 USD, based on the Guardians Of The Galaxy Yubi’s Figurines on Amazon.com.

In practice, if you pick up a few of these at time, as many blind bag buyers do, you can bring the price down quite substantially. 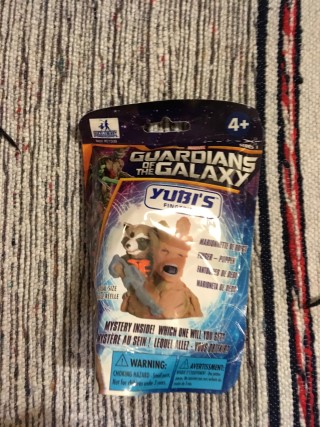 This is a figure from the DC Comics Essentials Series. It’s one that really looks the part.

I’ve had figures from this series in geek boxes before. Batgirl is another good addition to the collection.

There are lots of Batgirl figures available on Amazon.com. 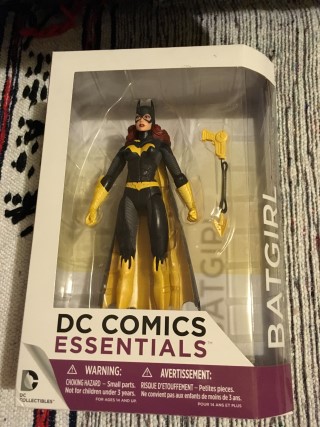 This is a slightly odd choice of items to round off the box, although I’ve had far worse filler items than this one.

It’s a new condition comic from Titan Comics. The oddity is that it was released in April 2017, a few months ago.

It is the first issue of the run and an interesting enough horror comic.

There is no price or barcode, so this may well be a variant cover, although that’s not obvious from the comic itself or the information card. From looking at other geek reviews, it looks like this originally came in the May 2017 Zavvi ZBox.

I’ll value this based on the standard edition at $3 USD. 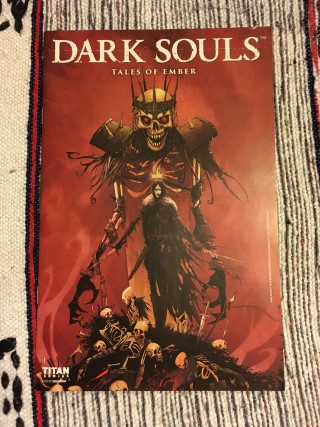 I get $43 USD of value, which isn’t far off double the purchase price.

I must say that I’m surprised that the box is this good. There were lots of items, something I always like, but none of them were really cheap looking.

And the main item (the Batgirl figure) delivered value itself.

Good to see My Geek Box putting in this effort. For a large scale geek box from a major retailer, they’ve certainly delivered here.

Find Out More About My Geek Box Here