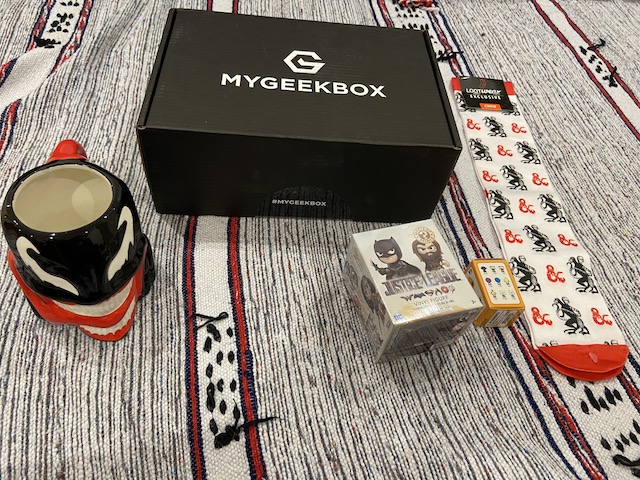 I can’t tell you too much about this one, but I can tell you about subscribing to the main My Geek Box monthly mystery box. This costs £23 GBP ($29 USD) on a month-by-month basis. That price does include postage within the UK.

The special Comic Con box arrived safely in a smaller box than normal and with lots of packaging to keep the small contents secure. There was no information card.

This one isn’t new to me. It’s actually the third time I’ve received it, as it was previously in My Geek Box Lite in December 2016 and also Loot Crate for August 2015.

The main difference is the previous versions of the mug came in a Marvel box. This one didn’t.

It is really quite an impossible shape to drink from. You could use it to put pens in.

As it is unboxed, I’ll reduce the value to $4 USD. 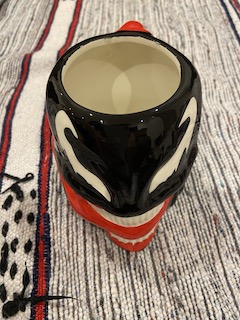 These are billed on them as a Loot Wear exclusive. Well, obviously not all that exclusive, as they’re in My Geek Box.

They originally came with the October 2017 Loot Wear, although they are new to me.

They are thin socks, mostly white, with the D&D logo. Fine to wear. 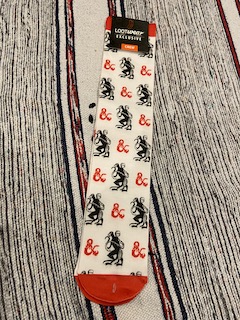 This one is just strange. It’s a tiny blind box made by kidrobot.

From looking what information I can find about this product, all of the characters wear only their underwear.

I got red-trunks, which is a tiny figure who is red all over. I wouldn’t have had a clue about the underwear had I not looked this up. Odds of getting him are 2 in 25 according to the box, so one of the most common ones.

You could just about put this on a keychain. But it is one of the more bizarre things to collect. 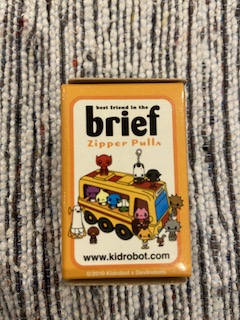 Another blind box, this time made by Funko and dating back to 2017.

These are 3 inches tall. You can see more about the Justice League Mystery Minis on Amazon.com.

I got Steppenwolf who is one of the most common, with odds of 1 in 12. He is well made, with an axe in his hand. 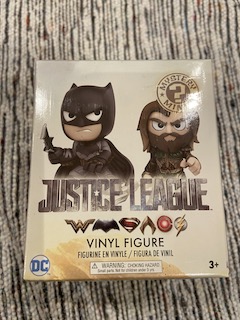 This box was a bit of fun. I got $25 of value here, decent as I got this as part of a collection of boxes at a knock-down rate. I’ve no idea how much this originally sold for at Comic Con.

I do like blind boxes, but two of them out of four items is a lot. I hope to never receive the Venom mug again.

The socks will be the most useful item.

The regular My Geek Box monthly box is always worth a look. These other boxes are always just a pleasant diversion.