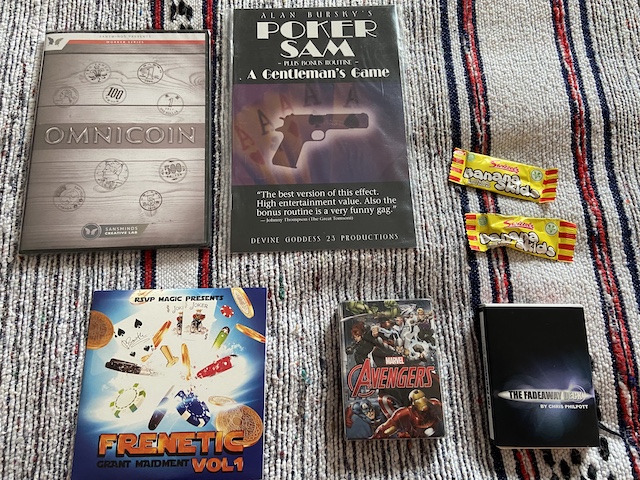 The Merchant Of Magic Mystery box is a box released once a month by a well-known UK magic store. That’s magic as in tricks, not magic as in “Magic The Gathering”.

There’s quite a cross-over between those people who buy geek mystery boxes and those into magic, so here you have the first ever GeekSubscriptionBox.com magic box review.

Unlike many mystery boxes, this one doesn’t come in a subscription format, it is just a monthly released box that you buy as and when you want it. Including UK postage, the price is £28 GBP (that’s $35 USD). For that, I was very impressed to have the box arrive the next day.

I say box, but apart from the outer box, this contained a padded envelope inside with all the items. There’s no separate information card included so I don’t know if all customers get the same box, or if these vary.

This is a trick which works with a UK 2p coin. It comes in a slimline DVD case, with an instructional DVD and the equipment you need to make the trick work.

The negative is the reviews for this trick aren’t that great. The positive is, it was released in mid-2019 and the price is reassuring expensive.

I’ll value this slightly below the cost price at $20 USD. 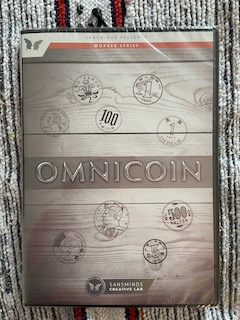 This is an eight page A5 booklet (six pages of content if you exclude the front and back cover). It describes how to do a magic trick.

It just shows you what money there is in information.

This really isn’t to my taste as it involves a surprise gunshot effect, which is maybe okay in the US but wouldn’t go down too well in the UK. Plus you really don’t get too much for your money.

Still, this is largely out of stock everywhere and dates back to 2009, so it could be considered collectible.

The normal price is around $20, but for what you get I’ll use what I consider a more sensible value of $10 USD. 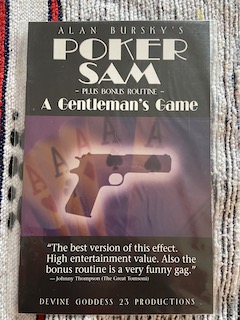 This is a bit of an oddity as it’s billed everywhere as a two DVD set, but only Volume 1 came with the mystery box.

There’s no expense spared on the presentation, which is a single DVD in a cardboard slip case. Still, it also doesn’t take much space to store.

On this volume, you get five tricks (and the secrets behind how they work) performed by magician Grant Maidment. Interesting stuff.

The selling price for this one is rather expensive, but it’s also hard to value this as a single volume. I’ll go with $20 USD here. 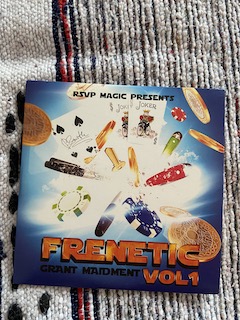 Now, this is much more the typical type of item we’d see on the site. It’s geek interest playing cards.

Cards are also the basis of much magic, so this also fits in with the box type. Always a fun item to receive.

You can buy lots of packs of Avengers playing cards on Amazon.com. I can’t see this exact pack, but based on the others, I’ll value this at $7 USD. 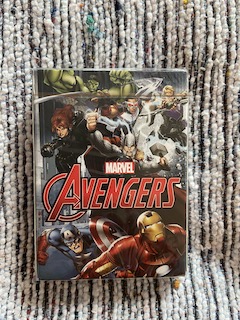 This is my favourite item of the month, a special pack of playing cards by Chris Philpott.

This looked like it was an opened pack of cards, but what it actually appears to be is a pack of industry standard Bicycle playing cards that have been opened, modified and some extra information added around the box.

The trick is very clever. With practice, you can make the faces of a set of playing cards simply seem to fade away. Video instructions are provided online.

This is a recent trick, released at the end of 2019. It also seems to have been quite well received by the magic community. I’ll value this at $20 USD. 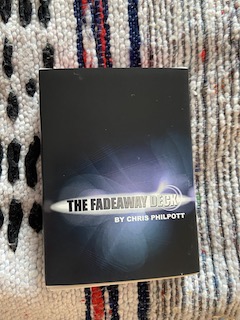 I won’t assign a value for these, but they’re a nice little bonus to have. 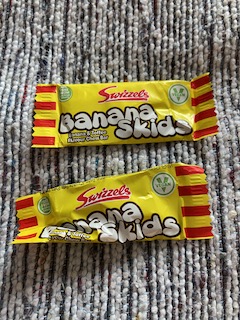 Like Magic? Start Your Merchant Of Magic Collection By Following This Link

If this was a normal geek box, I’d be asking where’s the T-Shirt? As my first magic box, this seems pretty decent. And there was even a geek interest item.

I get $77 USD of value, which is more than double the cost price. I am shocked though by how much some tricks sell for and your value could be higher.

You really are paying for the secrets.

The highlight has to the Fadeaway Deck. I look forward to watching the DVD as well. I would have been less impressed had I paid retail prices for some of the other tricks, but there you go.

It does rather seem that you end up with tricks that didn’t sell so well, but I guess that’s true of the content of most geek boxes as well.

I will pick up some more of these occasionally. I like the fact you’re not tied to a subscription and it’s a good way to experiment with magic.

Check Out The Merchant Of Magic And Their Mystery Boxes Here