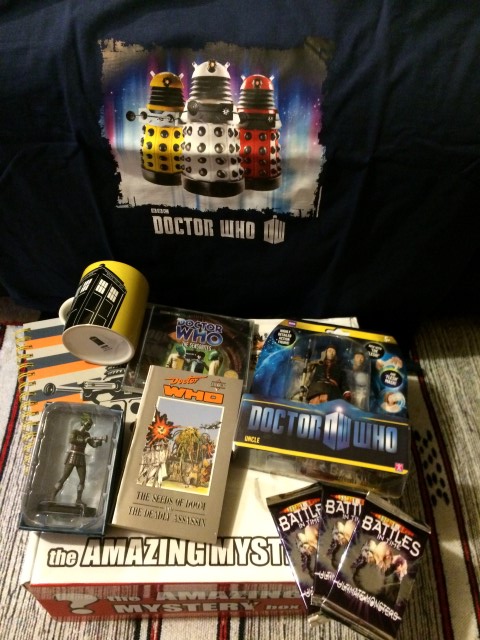 The Amazing Mystery Box provided this product free of charge for review purposes. This does not affect the editorial content of the review.

The number of firms offering geek subscription box form within the UK continues to grow. I hadn’t come across The Amazing Mystery Box before, but they offer a whole host of monthly mystery boxes with different themes.

The Amazing Mystery Box got in contact with me to offer me a review of one of their boxes. To make sure that I was treated just the same as any other customer, I order the box through their website, without telling them which box I was selecting, when it was being ordered or who it was being shipped to.

They offer monthly boxes aimed at both a family and mature audience, as well as occasional one boxes (I’ve seen a Thomas The Tank Engine box advertised by them recently) and some monthly boxes based around popular geek franchises, including Star Wars and Doctor Who. As a Doctor Who fan, I jumped at the chance to try out one of these boxes, as it’s rare to see a subscription package focused on this market.

The Doctor Who boxes also look like their most successful selection. I went for the Gallifreyan box which is billed as their Extra Large size, costing £24.99 GBP ($32 USD) per month, including UK shipping. They also offer the Lilliput box, aimed at a younger audience, for the same price. You can also buy a £49.99 GBP ($63 USD) TARDIS box, which promises exclusive merchandise and signed merchandise, although to me that’s above what I’d likely spend on a monthly box, regardless of the quality.

I was very impressed by delivery. I ordered on a weekend, the box was shipped through Royal Mail on the Monday and delivery attempted on the Tuesday (although I was not home, so had to rearrange delivery). The contents came in a large heavy branded box, much larger than the typical geek box. Newspaper was used to stop the contents moving around in transit, an effect not quite as posh as some other boxes, but a good use of resources.

I presume that this was the same as the standard April 2017 box, although I selected the one-off option from the website (the same price as the recurring subscription), so I can’t guarantee that. The box didn’t contain an information card.

This is an official blue T-Shirt, with three Daleks showing on it. All of the Daleks are different colours.

This is a cool design and a great start to the box. 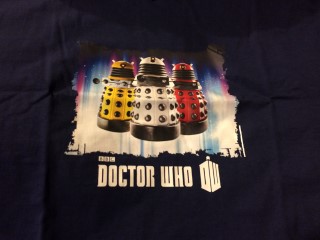 This is a 5″ action figure that comes with several interchangeable parts. The character was introduced in The Doctor’s Wife, an eleventh doctor TV story and was one of the figures released in 2013.

You can see the Uncle figure from Doctor Who on Amazon.com. The typical value is $7 USD. 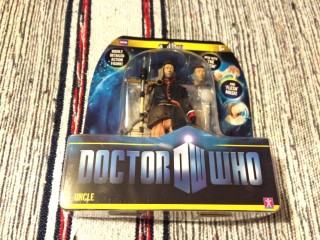 I recall getting a similar styled model of Davros in a geek box previously and this new series styled Silurian is similar.

This also dates back to the eleventh doctor era and stands at 4″ tall. It’s well packaged in a rectangular box with a plastic cover. A good display design too.

You can get the Silurian Warrior Cold Blood Model on Amazon.com. Based on the pricing there, I’ll assign a value of $12 USD. 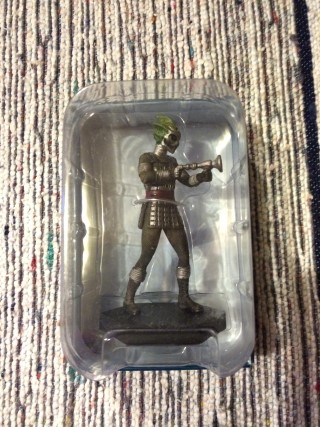 This is an official hardcover and spiral bound notebook made by Pyramid International. The Dalek print works well and this is a useful item.

I can’t spot this exact item, but there are lots of Doctor Who notebooks available on Amazon.com.

I’ll value this at $5 USD, although many sell for more than this. 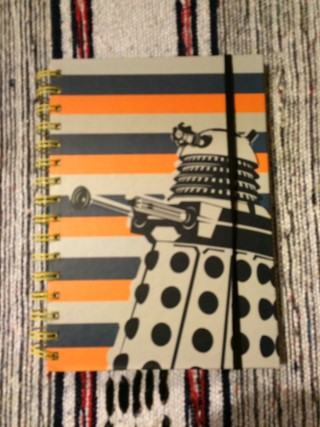 This is a boxed mug and an official item.

The design is relatively simple, but the blue police box style on a yellow background works well.

There are many Doctor Who mugs available on Amazon.com.

As with all items of this type, pricing for mugs varies a lot and I can’t spot this exact one. As this is an official item, I’ll work with a value of $8 USD 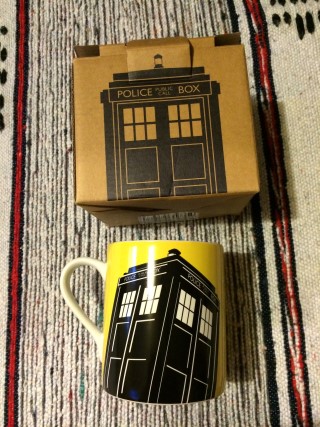 This is interesting as this was published in 1989. I remember this series of 2 in 1 reprints from first time around.

This looks like it’s in brand new condition and there must still be a lot of Doctor Who books from past eras in warehouses. I’ve had others (not this particular series) in geek boxes before. The pages are styled yellowed, but that’s to be expected.

The stories contained in this collection are The Seeds of Doom and The Deadly Assassin, both of which were originally available as the thin Target novels of the past. They novelise TV stories from the fourth doctor era.

The cover price on this one is £2.95 GBP (about $4 USD). It’s hard to decide on fair pricing here. You can buy this Doctor Who Classics release on Amazon.com, but new and second hand prices vary a lot.

I can see some value here, so I’ll stick with the $4 USD valuation. 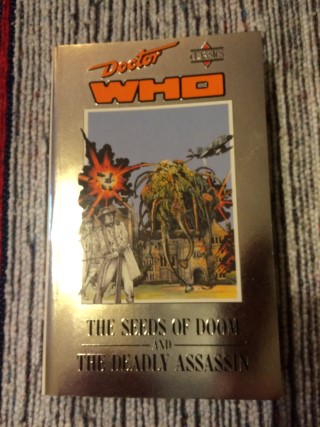 This is a two CD release, originally issues in 2008 of a TV soundtrack of a first doctor story. The episodes do exist and are available on DVD. The soundtrack has linking narration from William Russell to help listeners make sense of the visual aspects of the story.

I own a lot of Doctor Who CDs, but this isn’t in my collection, so it’s great to add, particularly as I always enjoy the early stories a great deal.

The Sensorites soundtrack CD can be found on Amazon.com. The value here is $10 USD. 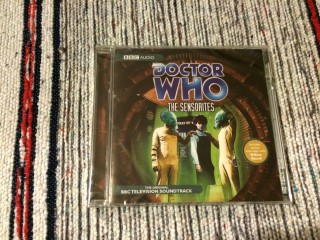 The final items in the Doctor Who box are three packs of these trading cards. Each packet contains nine cards.

I never followed this, but it’s a collectible card game which was released with an accompanying magazine between 2006 and 2009. These cards were part of the fourth of five series, released in 2008. The website accompanying the games is no longer available and, as far as I can tell, the cards are no longer being manufactured.

Despite that, there are still collectors for these cards. You can buy Doctor Who Battle In Time card packs and individual cards on Amazon.com.

Valuations are up in the air, but I’ll go with a conservative estimate of $1 USD per pack, $3 USD total. As with all these mystery type items, card packs are always fun to look inside. 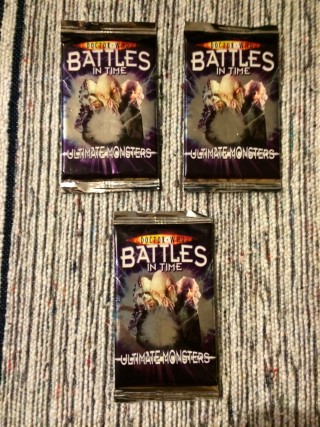 Want To Get Your Hands On A Doctor Who Geek Box? Check This Option Out

I have to take off my hat here and say that this is an excellent Doctor Who box.

I get $59 USD of value, which is nearly double the cost price.

The box is slightly biased towards new Doctor Who, but there’s enough from the original era to keep fans like me happy. I like the fact that all of the items are official, including some pulled from way back in the archives.

There’s very little which is new, which may be a problem if you’re a fan of Peter Capaldi and the current series. The items are all new to me though, which is important. There’s also nothing that comes across as really cheap.

I won’t pick out a favourite item, but I do like the T-Shirt, the resin model and the CDs. And, it’s great to have a book included, particularly one from this type. Maybe I’ll get to remember the era of the New Adventures sometime soon.

If you’re a Doctor Who fan, I think you’ll enjoy the Gallifreyan box from The Amazing Mystery Box. I’m certainly looking forward to checking out some of the other boxes they release each month.