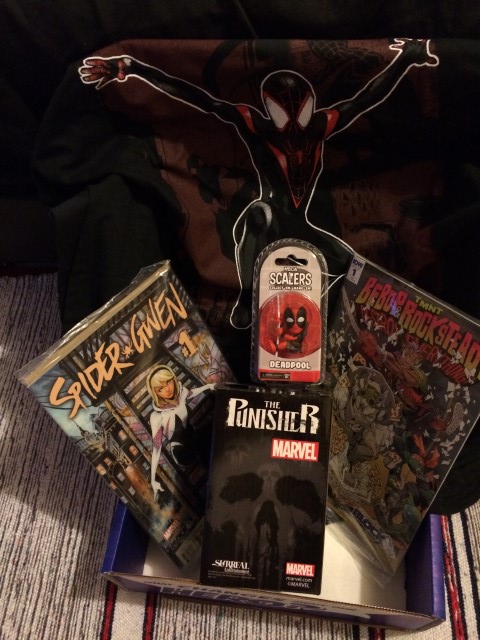 Comic Block tends to be good fun, bringing both comics and comic related items in a box from the Nerd Block family each month.

This review reflects the relaunched box from earlier in the year (around double the size of the previous offering). I’ve found the new style of box much more interesting than the old one.

Pricing for Comic Block, including shipping from Canada to the UK, is $33 USD (that’s around £24 GBP). I have a slight discount as I still pay the previous rates. Like many boxes, there are also often offers available, as well as discounts for subscriptions of more than one month.

Buyers in the UK will probably have realised that the exchange rate has gone down. I’ll be reviewing this and repricing from next month onwards if necessary.

The June 2016 box arrived safely in the UK in early July (it’s one of the last boxes to be posted each month). The box seemed rather heavy this time, although, as the review will show, this wasn’t due to the comics inside.

The box also contained the information card with details of the items and a $10 credit voucher for Shirt Punch, which I may use if I can find something to use it on where the shipping doesn’t make the overall cost prohibitive.

A really great design! The mix of black and red works well on the T-Shirt, with the addition of the white highlighting. 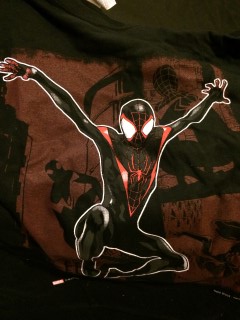 This is a large glass, billed as a pint glass on the information card, but it looks slightly smaller.

The print fits the glass well and this is a useful item to have in the collection.

There are various Punisher glasses available on Amazon.com. I’ll use a mid-point value for similar items of $8 USD. 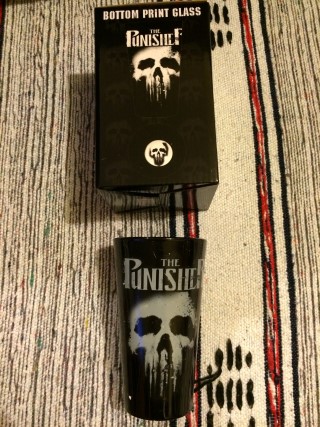 These are fun little items, designed to hang off cables, but could also be put on door handles and similar.

With Deadpool being such a popular character now, this is a great item to include in the collection.

You can see the Deadpool Scalers on Amazon.com. The price there looks slightly inflated, so I’ll go for the typical value for the rest of the line of $10 USD. 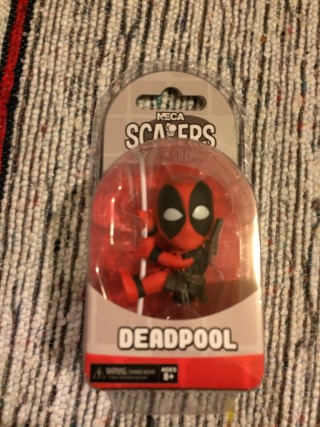 This comic came in one of the useless bags that really needs to be discarded once opened.

This is a Teenage Mutant Ninja Turtles spin off from IDW and is a Comic Block exclusive cover. It’s the first in a mini series, which I believe is five issues long and involves time travel, so seems a good addition to the box.

There’s no price on the comic included here, although the standard version sells for $3.99 USD, which is the price I’ll use. 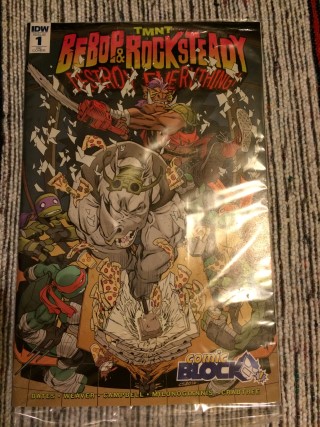 Another badly bagged comic. I haven’t followed this series at all (a spin-off looking at a Gwen Stacy from an alternative earth who received spider powers instead of Peter Parker), but I can tell that it’s got a big enough following to release an annual.

I’ll certainly give this one a try. 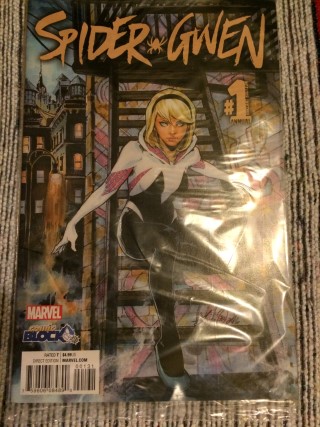 You Can Get Hold Of Your Own Comic Block Right Here

There’s $37 USD of value here, which is right in line with the cost price. There is a great T-Shirt included.

Glad to see that both of the comics had variant covers to make it worthwhile buying them in Comic Block. Wish that they’d sort out the bagging.

The glass is great too, but this box feels like it’s lacking a big item somewhere.

I don’t quite value a glass and a Scalers item the same as a full-size POP! or other item.

Still, there’s a fun feel to Comic Block. And plenty to offer when the right items are inside.