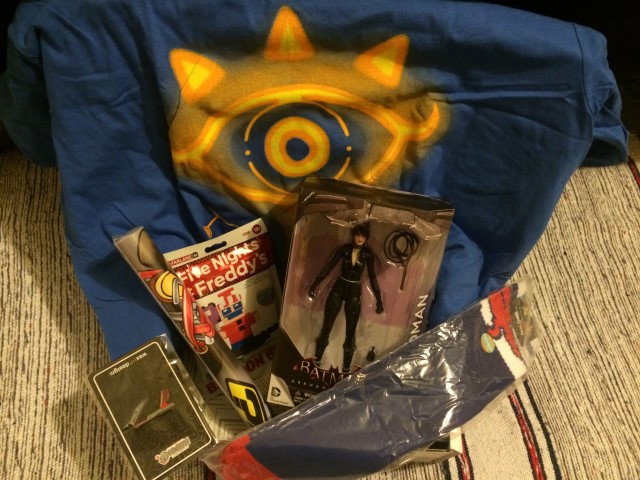 It seems like quite a while since I’ve reviewed an Arcade Block. I’ve also not seen many Grab Blocks, which are geek boxes bringing together a selection of items from previous boxes at a discounted price.

Previously, Grab Blocks used to go on sale every few months as part of a special deal. Now, they’re easily purchased alongside any other block as they appear as a discount offer when you get to the checkout.

As you may expect, Arcade Block contains a selection of gaming related items. Despite the name, I’ve found that these most heavily include items from recent console releases, which is of less interest to me than if these were covering retro games.

To give you an idea on pricing, the standard cost for Arcade Block is $32.49 USD (£27 GBP). That includes shipping to the UK. The special offer cost $22.94 USD (£19 GBP). This isn’t a massive saving and seems a lot more than the last time I reviewed a Grab Block due to the poor UK exchange rate, but it still represents a discount on the regular price.

One thing I do like about these boxes is that different Grab Block subscribers get different items. That makes every review and unboxing video interesting.

Shipping for this one was good, with the box being sent very soon after ordering rather than having to wait for a monthly ship date. That’s great if you’re impatient to get some geek mystery items into your hands. Recent boxes from the main Nerd Block family offerings have been shrink wrapped, but this wasn’t the case for Grab Block, which just arrived (safely) with a standard seal.

As this was a Grab Block, there was no information card included, although there were some cards advertising the future change of Arcade Block (to become Gamer Block, with both Mature and Everyone variants). The box also contained a $10 USD voucher for the Nerd Block shop, although I haven’t included that in the overall value.

I like the blue background and yellow/gold print with the design here.

This T-Shirt is from the August 2016 Arcade Block.

I’m going to assign a value here using the T-Shirt standard of $10 USD. 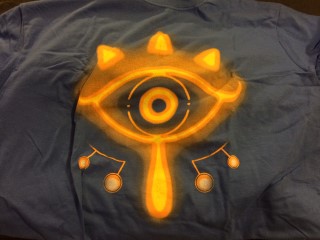 These are a pair of sports style socks, long with no separate heel.

I like the simple design for these socks, which were in the October 2016 Arcade Block.

I tend to value these official licenced socks at $10 USD and I’ll stick with the same pricing here. 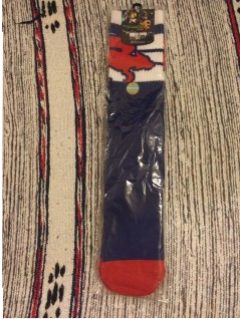 It’s fairly stylish for a pin, although I can never assign much of a value to this type of filler item.

I’ll assign my standard value for these of $2 USD. 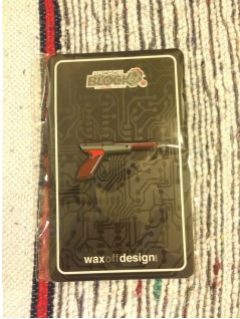 I haven’t unrolled this poster, as it’s currently shrinkwrapped and is going to be a present for a friend of the game, but it’s a fun cartoony design reflecting the original game.

I remember spending lots of time playing this on the SNES when I was younger.

This one was in the October 2016 Arcade Block.

There are a lot of good selection of Super Mario Kart posters available to buy on Amazon.com.

I’ll assign what I think is a sensible mid-range value for these smaller posters of $5 USD. 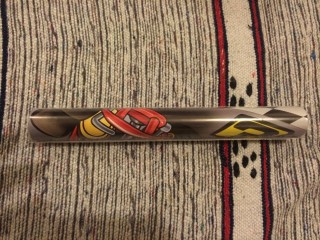 I don’t know anything about this game, which looks like it’s in the horror genre.

I would have had no idea this was meant to be scary just looking at the design.

There are a whole series of these Five Nights At Freddy’s Construction Sets available on Amazon.com.

Based on the pricing of related items, I’ll value this at $10 USD. 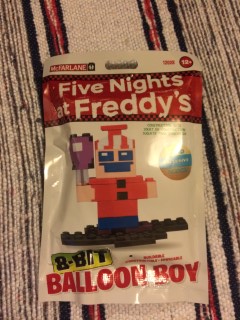 A great figure, that comes with swappable hands and a whip. It is part of Series 2 of the Batman Arkham Knight figures.

This came in the October 2016 Arcade Block, where it was one of a number of figures that could have been the main product. I’m glad to have got Catwoman out of the different options.

You can get the Batman Arkham Knight Catwoman Figure on Amazon.com. The price for the value assessment here is $15 USD. 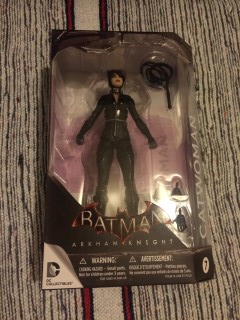 Find Out More About The Standard Arcade Block Subscription Here

The positive here is the value. At $52 USD, this is over double the cost price of the box.

In terms of my particular gaming interests, this doesn’t quite do it. But I do like the T-Shirt design and the figure carries a lot of value. The socks, like all socks, will get used.

Where the box lets itself down is in presenting itself as a Grab Block. I usually love them because of their variety, but in this case, 5 of the 6 items are all from the same monthly box.

I’m not a perfect fit for Arcade Block, but I’ll be interested to see what the new Gamer Block brings.