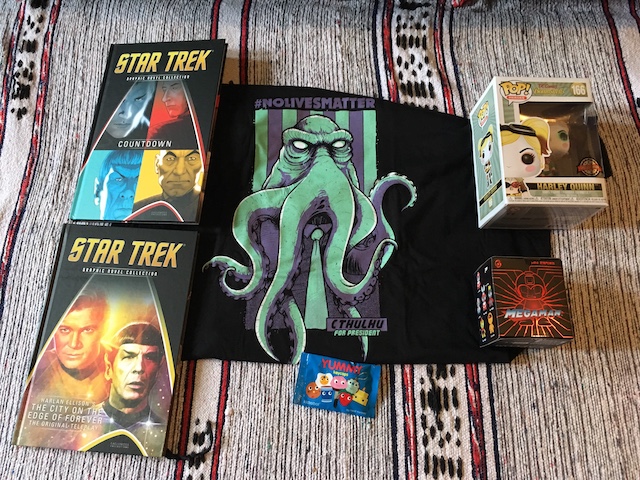 My Geek Box is part of the Hut Group. The company releases several different geek interest boxes every month, including the one being reviewed here.

This well-established box was delivered through Royal Mail, although I missed the delivery had to pick it up from the local office. Unfortunately I then got caught in a downpour on the way back home and the (rather heavy) box got soaked. Thankfully the box dried and the contents weren’t damaged.

The main My Geek Box sells for £23 GBP ($29 USD) per month including UK postage.

My Geek Box doesn’t include an information card and tends to contain mainstream geek interest items, rather than exclusives.

This is a cool T-Shirt from his popular horror franchise. I like the visual image on the black stock.

You can find a good selection of Cthulhu T-Shirts on Amazon.com.

I value this at $10 USD, which is my usual geek T-Shirt price. 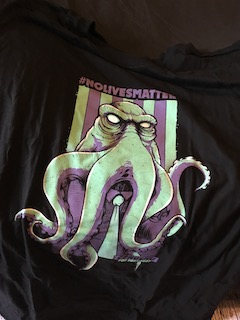 This is POP! Heroes number 166, part of the DC Comics Bombshells collection. It’s more colourful than the regular version, with Harley Quinn dressed in green and red.

I’m struggling a bit to place this one. My Geek Box have this on their site as a Festive Edition, but it has a different sticker on the box. You can also see this version of the Harley Quinn Special Edition Funko POP! Vinyl on Amazon.com.

Due to the limited edition nature, I’ll value this at $18 USD. 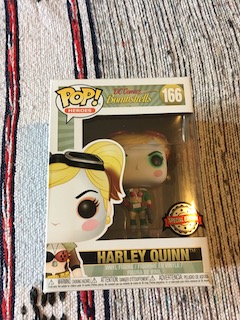 This is a small box, containing a CAPCOM item from the video game franchise and made by kidrobot. It’s a blind box, so you get a random secret figure from the series inside. There are at least 12 to collect, plus some mystery figures.

You can see the Megaman Blind Box on Amazon.com. It looks like this dates back to 2015. 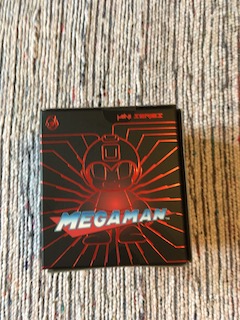 This is just a fun small item from kidrobot. I would never buy them, but I’m happy to have them in a geek box.

Basically, it’s a food item that slips on top of a key. I got a blue coffee cup.

I can’t find this exact edition on Amazon,com, probably because it’s an older version, but they do have the Breakfast Edition of Yummy Keytags on Amazon.com, which will give you more of an idea. 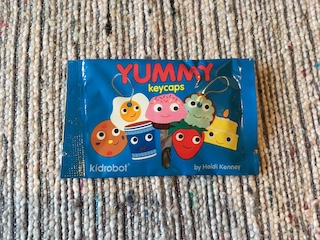 This is the first of two hardback Star Trek books from the Graphic Novel collection published by Eaglemoss in 2016. This contains a four issues comic miniseries published by IDW in 2009, forming is a prelude to the 2009 Star Trek movie from that year.

There’s also Issue 1 of the Star series published by Gold Key comics from 1967 in the back.

From what I can work out, this series of books began by being published fortnightly and is now being released weekly, collecting together Star Trek stories from across a wide variety of publishers, including rare international editions. There are also special editions for those people who don’t find one book a week to be enough.

The regular price is £10.99 GBP, but the first issue was discounted to £1.99 GBP and the second issue to £6.99 GBP, presumably to encourage people to start their collection. Apparently there are 80 issues planned and obviously the idea is to get people to sign up for the collection, so this is rather a promotional item.

It’s a fun read, but based on the standard pricing, I’ll have to value this at $3 USD. 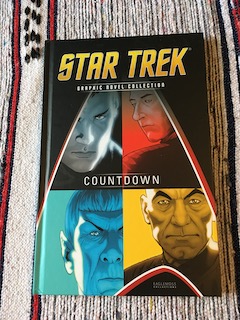 Star Trek The City On The Edge Of Forever Book

This is Volume 2 of the Graphic Novel collection. Based on the logic above, I’ll value this at $9 USD.

The main contribution is what I believe was originally a five issue IDW series from 2015, which took the original scripts of classic episode The City On The Edge Of Forever and turned them into comics. There’s also Issue 2 of the Gold Key Comics series in the back.

The art is strong for this one and I can see why these comics collections have quite an audience. 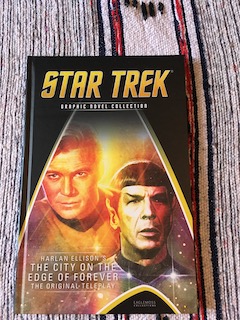 A good My Geek Box. I get $51 USD of value, which is well above the cost price.

I found all the items interesting – and that’s a rarity. I always like receiving books in boxes.

Do check out My Geek Box. They’re doing a decent job for the UK geek market.