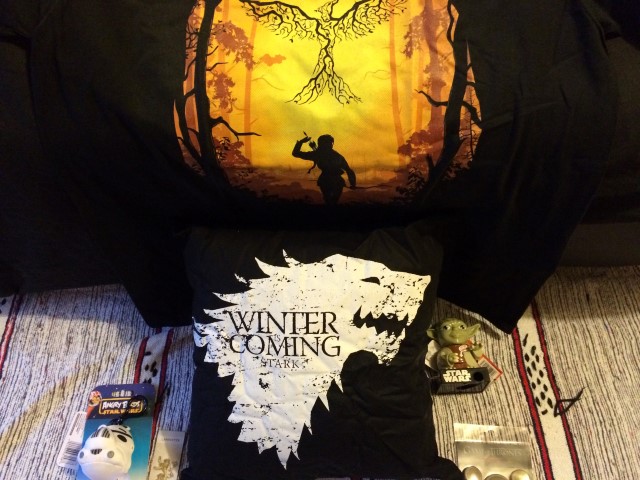 Here’s a review of another UK based geek box that’s new to me, although it’s been operating for quite a while.

Super Geek Mystery Box is a relatively small box provider, or at least that would be my assumption based on the limited number of reviews and unboxing videos that I could find on the Internet.

The company behind the box, Super Geek Stuff, release several box options each month, including the main geek box which is reviewed here. Other options include an anime specific box and you can also order personalised boxes to match your interests.

The standard monthly pricing for the mystery box is £25 GBP (around $35 USD), which includes postage.

The April 2016 box was slightly delayed, with this not being sent until May. The contents arrived in an unmarked brown box, almost a cube in shape and delivered through a courier firm (I much prefer boxes being delivered by Royal Mail). Delivery took around three days from the email notifying that the package had left.

There was no information card provided within the box, although the T-Shirt did have a company sticker on. The theme for the box was War.

This design arrived in a sealed bag with a label showing that it was printed just for the box.

The Hunger Games is my best guess for the T-Shirt inspiration, but there’s nothing really to check this against. In any case, it’s a high quality print of an archer in a fantasy scene. 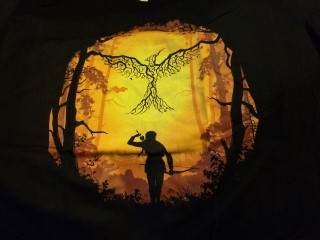 This is a fun novelty item. You twist Yoda’s head to insert candy balls and you use a button on the front of Yoda to release them. Yoda also makes a sound when the candy is released.

A small bag of candy balls is included, although they don’t taste of much (very slightly sour apple).

I can’t find this exact model online, but I can a see a similar Star Wars Stormtrooper Sweet Dispenser on Amazon.com. Based on that, I’ll assign a value of $5 USD. 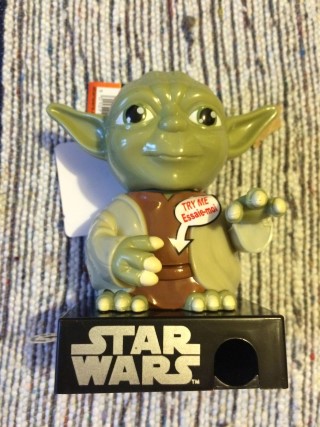 Although I get too many filler badges in geek boxes, this is quite a nice set, particularly with the large logo badge that’s included.

You can see the Game Of Thrones Four Great Houses Badge Set on Amazon.com.

The typical value for this is $8 USD. 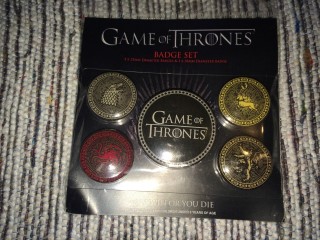 This is an interesting combination of franchises in the form of a bag clip looking rather like a cute Stormtrooper head.

It’s almost like a key ring with a small plush attached with a reasonable solid filling, about 2″ or so in diameter.

You can look at the Angry Birds Star Wars Stormtrooper Bag Clip on Amazon.com.

The typical value is around $5 USD. 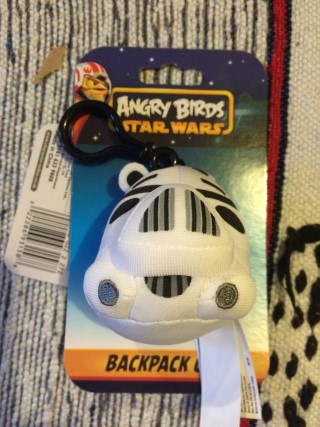 This is something of a mystery item, which is when it’s useful to have an information card included with the box.

Essentially, it’s a double sided clip, with unfolds at the top, with the inner sides magnetised.

My best guess is that it’s designed as a money clip (for notes), or if not, it could be used to hold business cards or other paperwork together.

It could also be used as a bookmark.

There are other Game of Thrones money clips available on Amazon.com.

I can’t see one quite like this, but I’ll take a punt at a sensible value based on other branded magnetic money clips at $10 USD. 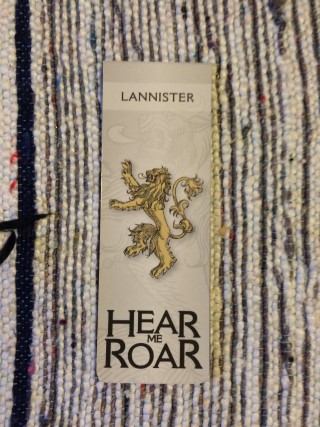 This is a great cushion design that will go well on a lot of furniture, and has already ended up on my sofa.

I can’t see this exact cushion design online, but there are other Game of Thrones cushions available on Amazon.com.

The prices of these vary a lot, especially as a lot of these are just the cushion cover only (without any filling inside). 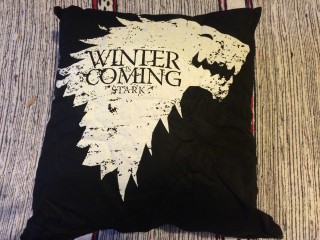 Like The Look Of Super Geek Mystery Box? Find Out More Here

I get an even $50 USD of value, which is well above the cost price, with no really bad items (although the mystery money clip may be high).

The highlight is probably the cushion, which actually took up most of the space inside the packaging. I’m grateful for having the filling included too rather than just a cover.

I also really like the T-Shirt and there are some novel and interesting other items.

I do wish that there was an information card included, even if this was just a quick home print. Advertising the upcoming theme and other products is also always a good idea to keep subscribers interested.

Super Geek Mystery Box is worth exploring again in the future. Right now, there are too many UK boxes for me to follow them all, but I think this is a box that definitely deserves a market.

Get Your Own Super Geek Mystery Box Here