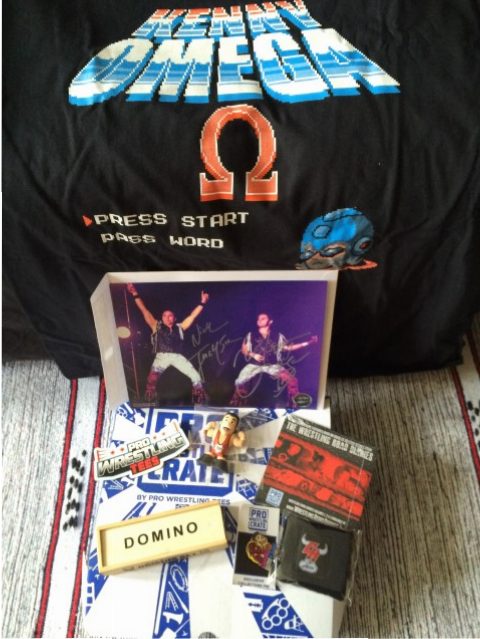 There are a lot of professional wrestling geek boxes out there right now, including both UK and US based boxes. Pro Wrestling Crate is one of the longest established of those boxes, but one that’s new to me. It ships from the United States.

There are three different versions of the box available, depending if you want one, two or three exclusive T-Shirts.

In all cases, discounts are available for longer-term subscriptions.

Shipping to the UK was smooth, with the items arriving through Royal Mail in a stylish blue and white box. There was also an information card included, which is handy for finding out information about the items. One thing the card doesn’t make clear is whether the items are exclusives or not. I believe that the vast majority of items included are, particularly the T-Shirt, but in the absence of that information, I haven’t flagged this in the review.

The theme for this wrestling box was “Best of Indy Wrestling”.

This is a good design for one of the world’s most celebrated wrestlers right now.

It’s black stock with video game like graphics, including the Greek letter symbol for Omega. 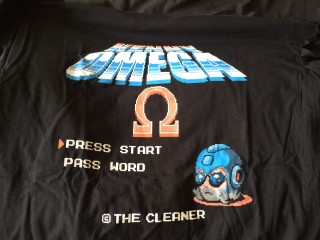 Now that Chris Hero has joined (or rejoined) NXT under a different name, it looks like there’s a rush to move his merchandise.

This is a cool collectible, although it’s hard to value, particularly as there’s only one wristband rather than a pair.

Looking at similar items, I’ll value this at $5 USD. 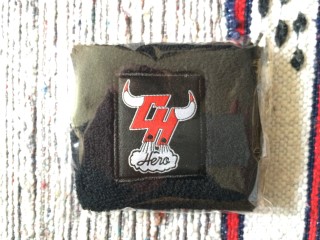 This is the one item that does say Exclusive as part of its title in the information card. 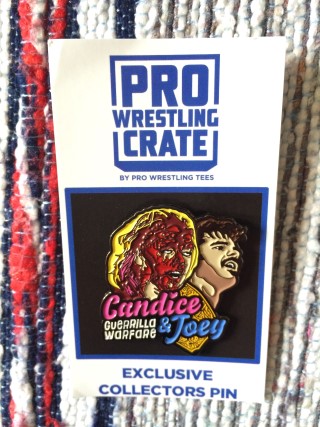 Dominoes are a game I remember playing when I was growing up, but I don’t own a set, so these will come in handy.

They come in a nice wooden box.

The tie in here is based on Cliff Compton’s ring name of Domino, under which he competed in the WWE around 10 years ago.

There are lots of Domino sets available on Amazon.com. 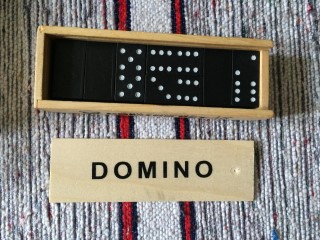 This is a Micro Grappler on the information card. The figure packaging calls it a Micro Brawler. It is by Pro Wrestling Crate, so therefore likely an exclusive.

This is rather fun, slightly bendy and measuring under 2″ high.

Really hard to value, particularly as it’s not available elsewhere and this is an unusual size profile for wrestling items. I’ll go for $5 USD. 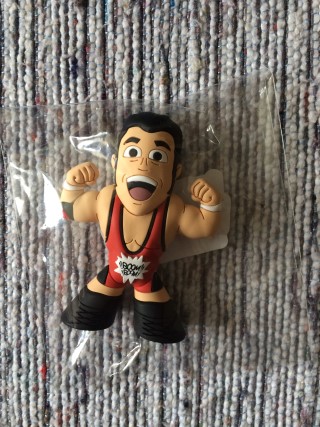 This is a small sticker advertising the company producing the T-Shirts included in the box.

There’s also a 10% discount card for Pro Wrestling Tees included in the box.

I can’t see a way to assign a value to this one. 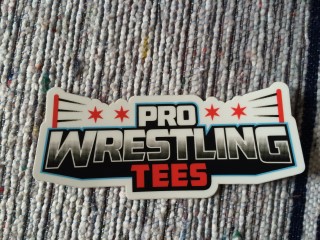 This comes in a cardboard sleeve bearing the Pro Wrestling Crate logo and is said to contain an hour of deleted scenes from the three volumes of The Wrestling Road Diaries, featuring wrestlers such as Bryan Danielson and Colt Cabana.

I presume that it’s an exclusive as it carries the Pro Wrestling Crate logo on the packaging.

As an exclusive, this is always difficult to value. This should be fun to watch. I’ll use a value I’ve used for wrestling DVDs in the past of $8 USD. 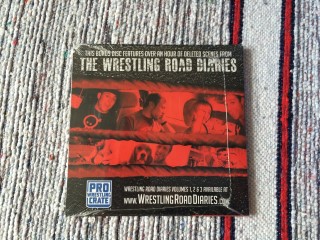 This is a great 8″ by 10″ print of one of the hottest tag teams in the world, which is also signed by both of them. This also came packaged in an envelope which is great for protection.

The typical value I use for prominent wrestling autographs is $10 USD. I’ll stick with the same value here, even though this has two autographs on it instead of one. 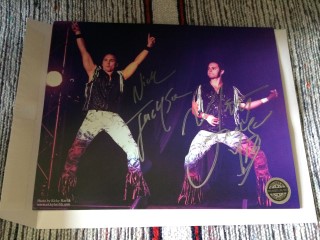 A wrestling box which benefited from a great theme.

I get $48 USD of value, which is decently above the cost price. There are some very well selected items inside, including some exclusives. A perfect autographed photo as well.

As well as the financial part, I notice a small mention on the information card that a portion of the box proceeds are being donated in memory of the late Kris Travis, a UK wrestler who passed away after a battle with stomach cancer. I always appreciate it when geek boxes donate to worthwhile causes.

This box had the interesting Kenny Omega T-Shirt inside. The information card also says what would have been in the higher level subscriptions.

If you’d subscribed to the Tag Team box, you would also have received a Richochet T-Shirt. The Triple Threat box would have further added a Marty Scurll T-Shirt.

I think that Pro Wrestling Crate is right up there with the best wrestling boxes. If you’re a fan of the professional wrestling box genre and want to check out the boxes shipped from the USA, this is a good one to try out.