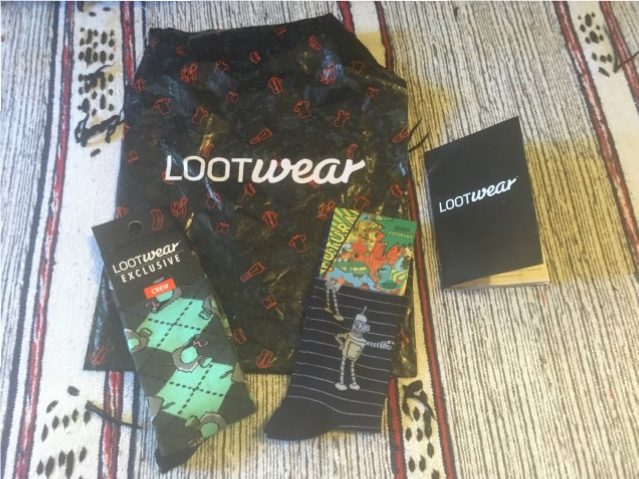 I’ve developed quite a liking for geek sock packages. They’re small, so fit in the letterbox and I get more wear out of the socks than I do with the vast quantity of geek T-Shirts I’ve now got in my collection.

So, it was rather a surprise to see that I’ve not picked up LootWear Socks for over a year.

To be pedantic, I’ve never picked up LootWear Socks, as this used to be called Loot Crate Level Up. But, it’s still the same package. You get two pairs of exclusive geek socks each month, in typical “average” size and they’re based around the main Loot Crate theme for the month.

In fact Loot Crate also tends to tell you the franchises included inside the package that month, although I didn’t pay much attention. I did remember the theme, which for September 2017 was Robotic.

The socks arrived safely in the UK in a plastic envelope and with a fold-out information sheet with details of the socks (as well as what was inside the other LootWear options for the month, which now even include men’s underwear).

There are lots of options regarding which combination of LootWear items to go for. The package reviewed here, the socks, costs £10 GBP ($13 USD) shipped to the UK. Loot Crate do now charge in pounds for UK subscribers, so the amount charged can fluctuate a little.

That does make it one of the cheapest geek subscriptions available, although of course this is just two pairs of (cool) socks you’re getting in return.

First a cool pair of navy blue socks with pictures of Bender printed on them. They are billed as a LootWear limited edition on the back, although oddly they were released in 2016 if the copyright label is to be believed.

I have a standard value of $10 USD for official geek socks like these, which I’ll stick with here. 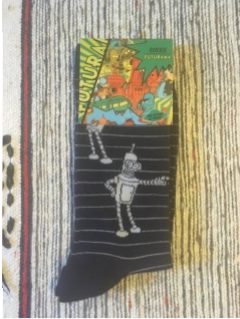 This is a show I know little about, but I like the design of these socks.

These are another exclusive, mostly in grey and turquoise and are long socks of the Crew Socks variety. Both pairs this time are a polyester and spandex mix.

I’ll stick with the standard value of $10 USD here. 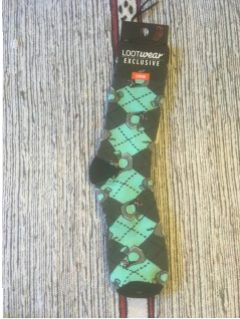 Follow This Link To Find Out More About The Different Loot Crate Options, Including LootWear

Nothing to complain about, I like both pairs of socks!

The total value of $20 USD is up on the cost price and fair I think, as socks like these are surprisingly expensive in the shops.

I’m very tempted to try the boxer shorts subscription soon, but for now, I know where to get new geek socks from when I need them!