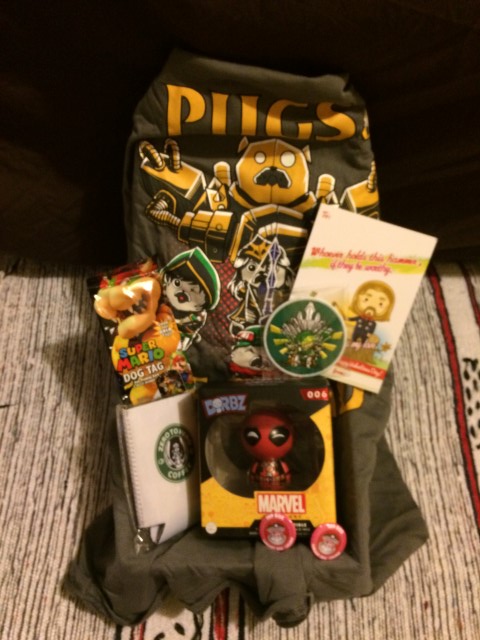 1 Up Box is an established geek mystery box from a company based in the United States.

The box has been produced since September 2014, but it’s only recently that I’ve found this available to purchase for the UK. I have checked this box out before and discounted it, but I can’t remember if there weren’t UK deliveries at the time, or if the shipping costs were prohibitive.

Neverless, the January 2016 box arrived safely at my door, coming in a box smaller than most but with distinctive green packaging. The main disappointing with this box was the slow shipping speed, taking close to a month to reach me. Thankfully, I managed to avoid other reviews and spoilers.

The box came with the catchy theme of Legend.

Shipping to the UK costs a standard price of $29.95 USD (£22 GBP) when paid on a monthly rolling subscription basis. That is along the lines of the pricing for other similar boxes.

I like the grey background of this T-Shirt and the bold printed design. I believe that the T-Shirt is based on characters from the League of Legends game series.

PUGs also references a term used in online gaming, as well as the breed of dogs.

I’ll be happy to wear this one and value it at the $10 USD standard. 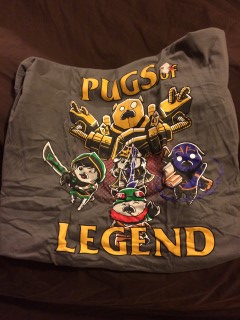 This is billed on the information card as the Game Of Legend, but seems to reference Link from the Zelda series.

To me, one of those useless items that you can get away with at most one in a box.

I value this at a charitable $2 USD. 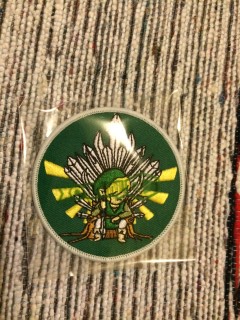 This is the big item in the box, from Marvel Series One of Dorbz.

I say the big item, but this is small compared with other common Vinyl items, such as the Funko POP! series.

It is a cool design, released by Funko as part of the Vinyl Sugar line. It’s also not a surprise to find a Deadpool item in a box – I’m sure that there will be a lot more to come.

You can see the Deadpool Dorbz on Amazon.com. Typical selling price is around $8 USD. 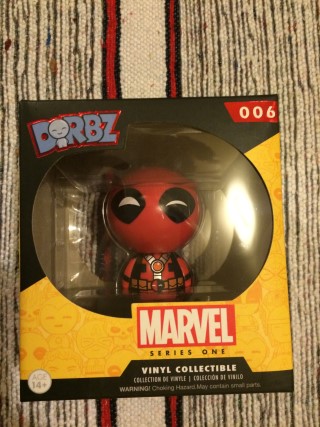 Rather embarrassingly, this is billed as one of the main items in the box. This didn’t even arrive in the UK until after Valentine’s Day.

I can’t assign a value to this item, which will end up straight in the rubbish. 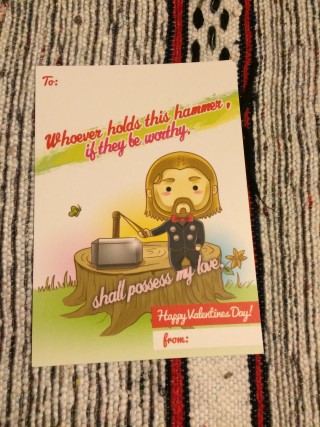 I like getting the occasional blind bag. They’re not the type of thing I’d ever buy, but they’re a lot of fun to open and see what’s inside.

Unlike the blind bags often found in geek mystery boxes, this is a relatively recent 2015 release. It also gives items from one of the coolest franchises in gaming history, which is cool.

You can buy these Super Mario Dog Tag blind bags on Amazon.com. Prices vary depending on quantity. For a single pack, a $3 USD valuation seems reasonable. 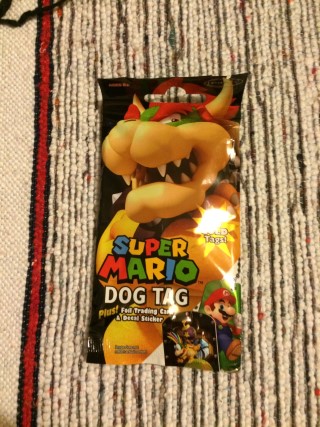 Zero To Hero Can Cooler

With the Starbucks inspired logo, I rather expected this to be designed to keep drinks warm, but it’s actually a can cooler.

It’s not obvious from the description or packaging, but I think that the idea of this is to keep an already chilled drink cold, not to cool down one that’s warm. It might also be to stop your hand getting cold holding the drink.

My best guess at a value here is $5 USD. 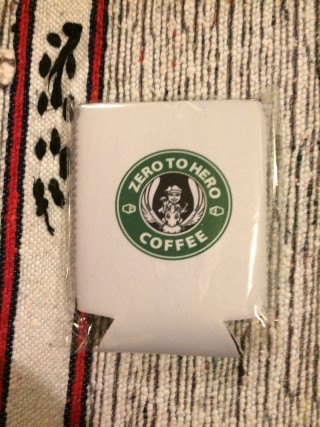 No value to these, but they are a fun branding item to include. Not sure how I ended up with two of them. 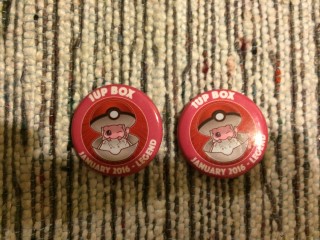 Want High Quality Geek Items Like These? Check Out The 1Up Box Subscription Options

I’m glad to have had the chance to pick one of these boxes up.

I get a value of $28 USD, which is slightly below the box cost. I’m sure that shipping within the United States is more reasonable.

I do like the T-Shirt and some of the larger items. There are some fun items too, such as the Mario blind bag.

What this box does miss is the exclusive items found with some of the other big companies and the small box size rather limits the high value items that could be included.

1Up box is along the same lines as many of the other mystery boxes on the market. It certainly won’t be a box that it’s worthwhile me buying every month, particularly with the slow UK shipping, but I hope to check out 1Up Box again later in the year.

Like The Look Of 1Up Box? Find Out More Here